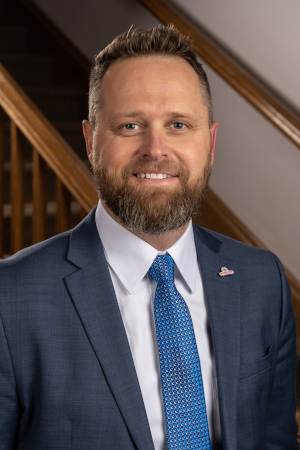 Mayor Mike Mendenhall was born and raised in Palmyra and Spanish Fork, his parents are John and Lenna Mendenhall. He graduated from Spanish Fork High School in 1998, attended Utah Valley University in 1999 before serving an LDS mission to Minnesota. He has worked in finance in Spanish Fork for 16 years. He works full-time as a Financial Advisor with Edward Jones Investments here in Spanish Fork.

He is married to Amber Geslison of Spanish Fork and they have three children, Nash, Monroe, and Jagger. Amber takes care of the kids, an English bulldog named Mocha, and a cat named Boomer.

When not working for his clients or the City, Mike can be found playing golf with Nash, watching Monroe dance, or “playing cops” with Jag,

Mike has served two four-year terms on the City Council. This is his first term as Mayor and currently serves on the following boards and committees: