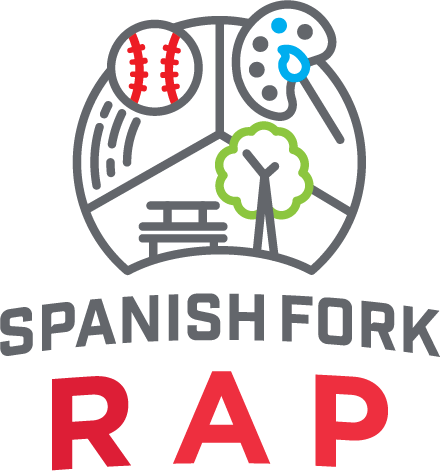 RAP GRANT APPLICATION
If you are interested in applying for a RAP Grant, please fill out the RAP Grant Application Form.

Applications for 2022 opened on February 1, 2022 and close on March 31, 2022.  Any approved grants will be disbursed after July 1, and must be expended before the end of the fiscal year, which is June 30 of the following year.

In order to qualify for a grant, an organization must:

Applicants must follow the RAP Program Guidelines, including submitting the Compliance Report.

2021 RAP GRANT RECIPIENTS
In June 2021, the RAP Program Committee reviewed grant applications and made a recommendation to the City Council for grant distributions to the following organizations:


RAP PROGRAM COMMITTEE
The RAP Program Committee is comprised of 9 members (7 voting and 2 non-voting), and includes the following individuals:

WHAT IS THE RAP PROGRAM?
The Recreation, Arts, and Parks Program (RAP for short) enhances RAP programs and amenities in Spanish Fork City. This is made possible through a RAP tax, which was approved by Spanish Fork voters in November 2018. The RAP Tax is a sales tax that is added to the regular sales tax rate. Revenues generated by the RAP tax are reserved for specific areas of focus in our community, such as:

Collection of the RAP Tax in Spanish Fork began on April 1, 2019.
WHAT PROJECTS CAN BE FUNDED?
RAP Tax funds can be used for a variety of projects and programs, in accordance with  State Code 59-12-1402 and Spanish Fork Ordinance 3.24. Funding may be used to support municipal or non-profit organizations providing programs such as, but not limited to:
Funding may be used for capital improvements of publicly owned or operated amenities such as but not limited to:

IDEAS OF PROJECTS THAT COULD BE FUNDED


Because the fund distribution will be subject to the recommendation of the Citizen Advisory Committee and approval of the City Council, it is hard to say exactly which projects will receive funding. Regardless, the City has several projects that could be priorities for the RAP Program, including but not limited to:

IS THERE A SPECIFIC PROJECT OR PROGRAM THAT YOU THINK SHOULD RECEIVE FUNDING?
Submit your ideas and suggestions here. Suggestions will be reviewed prior to the annual distribution in July.
HOW ARE FUNDS DISTRIBUTED?
HOW MUCH IS THE RAP TAX?
The RAP tax is 0.1%., which increases the sales tax rate from 6.75% to 6.85%. This equals 1 penny for every $10 spent.

Based on sales tax revenues provided by the Utah State Tax Commission, a RAP tax in Spanish Fork would have generated $491,000 in FY 2017 and $568,000 in FY 2018.
WHO PAYS THE RAP TAX?
Because the RAP Tax is a sales tax, it is collected at the time of purchase, just as the existing sales tax is collected.


DO YOU HAVE QUESTIONS ABOUT THE RAP PROGRAM?

If you have any questions that you would like us to answer about the RAP Program, please submit your question below.

Why did we need a new tax to fund RAP when we did not need it in the past?

At Spanish Fork City, we take pride in the various recreation, arts, and parks programs and amenities we offer our residents. However, as our community continues to grow, so will the needs of our residents. The RAP Tax enables the City to provide more for our residents than we had been able to in the past.

Are any of these funds going towards Library Hall?

The funds generated by the RAP Tax can not be used for the new building; however, they can be used for some library amenities and programs that fit within the RAP Tax ordinance language.

What portion of the tax goes to pay city officials or those on committees?

None of the funds generated can be used to pay city officials or members of the volunteer advisory committee. The funds can, however, be used to fund new positions associated with new programs.

What purchases does the RAP Tax apply to?

The RAP Tax is applied to any purchase that is subject to sales tax. The Utah State Tax Commission has information regarding which items are either exempt from sales tax or have a sales tax rate reduction (https://tax.utah.gov/sales/food-rate).

Would the tax apply to things such as vehicle sales? For example, how much would be paid in RAP Tax for a vehicle purchase?

The RAP Tax is applied to any purchase that is subject to sales tax, including auto sales. There are some items, including groceries, that are either exempt from sales tax or have a sales tax rate reduction. These items are not subject to the RAP Tax.

We have included a calculator on this page to help calculate what the RAP Tax would be for a specific purchase amount.

Will the RAP Tax be used for the arts?

Yes, the RAP Tax funds will most definitely be used for the arts.

Are the funds going to be allocated in percentages?

Funds will likely not be distributed by percentages; rather, the RAP Program Citizen Advisory Committee will review fund requests submitted by the Parks & Recreation Department and eligible 501(c)(3) organizations, and will make distribution recommendations to the City Council. The City Council will review the recommendations and make a final determination for how the funds will be allocated.

How long will the tax last?

State law (59-12-1402) dictates many components of the RAP Tax, including the length of the tax and the rate. A RAP Tax is levied for 10 years. After the 10 years, the City can propose to reauthorize the tax for an additional 10 years by placing it on the ballot again. Cities that have reauthorized the RAP Tax generally have had a higher pass rate during the reauthorization vote.

Will the rate increase?

No. State law sets the RAP Tax rate at 0.1%, and does not give cities the ability to change that rate; therefore, Spanish Fork City cannot increase the rate.

How does the RAP Tax affect the City's General Fund?

Every year, the City spends varying amounts on capital projects (e.g., infrastructure). A portion of these expenses go towards recreation, arts, and parks projects. RAP Tax funds can be used to pay for these projects, freeing up funds to be used on other capital projects (for example, a new fire station). Regardless, the intent of the RAP Program is to increase the annual funding for recreation, arts, and parks.

Do impact fees cover the costs for RAP?

The City already charges impact fees for all new construction, and a recreation impact fee is one of those. Those impact fees fund some of the new parks but cannot be used to add a new amenity. Furthermore, impact fees can only be used for the initial costs of a facility and not the ongoing operational costs.

Likewise, public safety impact fees can be used to build a facility but cannot be used to operate it.

What happens if the County institutes a RAP Tax?

How much of the current sales tax does the City receive?

Do increased sales tax revenues cover the costs for RAP?

Yes, it is true that our tax revenue grows as the community grows. It is generally believed that revenue growth covers the costs to maintain the level of service; however, this typically isn’t the case. For example, additional fire and EMS facilities and crews are needed to maintain our existing service levels (i.e., response times); however, the annual revenue growth is not sufficient to meet these needs, as well as growth demands for all other city services. Not only does revenue growth not keep up with service demands created by the growth, it also doesn’t allow the city to increase the level of service. The RAP Tax will enable the City to increase the level of service for parks and recreation while also freeing up some General Fund money for other service needs (e.g., fire and EMS).

Why use a RAP Tax rather than using property taxes?

One benefit of the RAP Tax is that Spanish Fork residents don't pay the full cost as they would with a property tax rate increase. For example, if a property tax rate increase were used, residents would put in $1 to get $1; using the RAP Tax, residents would put in $0.50 and get $1 because non-residents shopping in Spanish Fork would contribute the other $0.50. This is because about 52% of all sales in Spanish Fork City are from individuals who do not live in the City, according to data from the Utah State Tax Commission.