Tales from the Arabian Nights

In “Tales from the Arabian Nights” Scheherazade tells a story each night to the Sultan, Shahriar, who has been enchanted by an evil scimitar. For 1001 nights the tales help Shahriar overcome evil, while he finds love and redemption. The Arabian Nights stories are some of the world’s great treasures. They have existed for thousands of years, consisting of tales told in Persia, Arabia, India, and Asia. The Arabian Nights have inspired writers the world over with the ancient power of story. The Arabian Nights include fairy tales, fables, romances, farces, legends, and parables.

There are many speaking and solo parts available for both males and females, ages 5-18.

Classes start on Wednesday, August 31 at will be held weekly on Wednesdays, 5:15 to 6:30 pm at Larsen Elementary School.

Performances will be held January 10-14, 2023 at Spanish Fork High School. 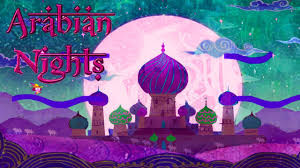 Banished by the ferocious tiger, Shere Khan, a human boy named Mowgli and his panther friend, Bagheera, are on the run in the deepest parts of the jungle. On their journey, the two meet a sinister snake named Kaa, a herd of elephants and a giant bear named Baloo, who teaches them the swingin' musical rhythms of the jungle. After surviving a dangerous encounter with a band of monkeys led by King Louie, Mowgli and Bagheera are forced to run for their lives. When Shere Khan returns, our heroes must rally their fellow animals into battle and restore peace throughout the jungle.

We are excited to add a Broadway Review to this class. It will be a wonderful opportunity for us to give more solos and dancing experiences to the students. We will spotlight different ages groups as well as the entire class with some of our favorite fun filled musical numbers. You are going to love it!

Speaking and solo parts available for both males and females, ages 5-18. Classes start on Wednesday, August 31 at will be held weekly on Wednesdays, 4-5 pm at Larsen Elementary School.

How Can My Child Become Involved in Youtheatre?

Registration begins on August 1, 2022 at RecOnline. Space is limited please register early! All students need to be registered before they audition. Participants need to be in the age range as described above for the specific play. Can I be in more than one show? YES!! You just need to register for both.

Registration is $45.00 a month, with a $5.00 a month discount if paid before the second class of the month. A $45.00 fee per show covers costume and script rental and T-shirt.

To be registered for a class, you will need to pay the registration fee. September tuition will be due September 14. Classes begin Wednesday, August 31. Refunds will only be given before August 31, 2022, so please plan accordingly.

Auditions will be held Thursday, August 18 and Wednesday, August 24 between the hours of 4 and 6 p.m. at Larsen Elementary. Please bring your child one of these days so they can meet with instructors and be assigned a part. If they would like to audition for a singing role, please be prepared to sing a song of their choosing. We have music available at auditions if you would like to use ours.

For more information please call Karma at 801-494-4730 or check out our blog at sfyoutheatre.blogspot.com where updates and performance information will be posted.